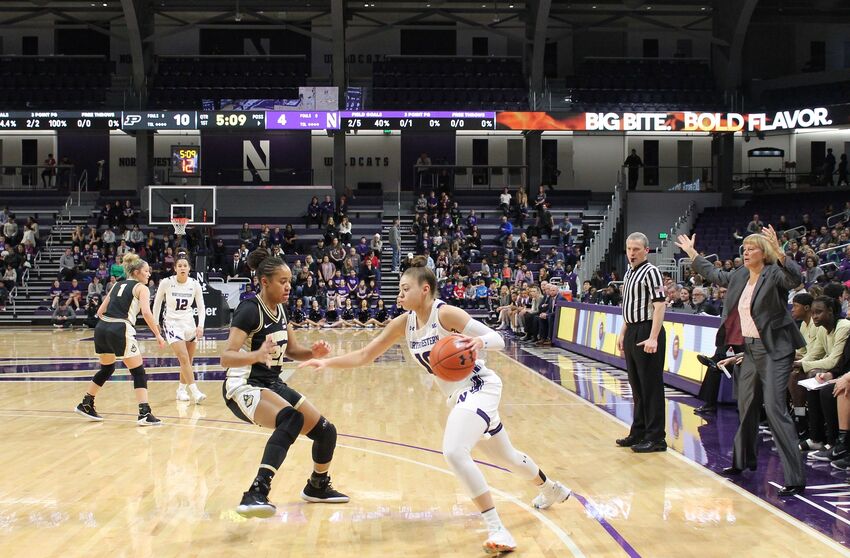 Northwestern’s Lindsey Pulliam drives towards the basket against Purdue on Jan. 12 (Photo courtesy of Andy Brown)

Lindsey Pulliam had another off night, but Northwestern found a way to likely play its way into the Top 25.

Ok, maybe not. That’s not exactly something we can confirm. But she has definitely come down with a wicked case of ice-cold shooting, which is mysterious as it is concerning for a Northwestern team trying to (deservedly, by many metrics) crack the AP Top 25 rankings for the first time this season. For the time being, though, her team has been able to make do, albeit by the thinnest of margins.

Despite Pulliam’s second consecutive quiet night from the floor (10 points on 3-for-19), the Wildcats pulled together for their second straight conference win, 61-56 over a strong Purdue team on Sunday. The win moves them into a four-way tie for first in the Big Ten at 4-1, and 14-2 overall.

NU was again up to the task two days removed from a thrilling 56-54 road win at Minnesota (capped off, actually, by a buzzer-beating Pulliam lay-up on a beautiful inbounds play). But it was by no means easy, or aesthetically pleasing. The ‘Cats nearly squandered what had been an 18-point third quarter lead, thanks to a poorly-timed 13-minute field goal drought that spanned from about four minutes left in the third until just over a minute left in the game. You can only survive without your star producing for so long, and a 32.3% team shooting mark bears that out.

Coach Joe McKeown is nothing if not a man committed to his brand as a radical optimist, as well as someone who’s not at his first rodeo.

“My middle name is Mr. Sunshine, if you didn’t know that,” McKeown said. “The positive end of [those struggles] is that I trust [my star players] every day. Their shots, I can live with because I know they’re capable, and I’ve seen them do it in big games and big moments, too.”

How exactly did NU even cobble together 61 with just 10 from Pulliam? Enter Abbie Wolf. The senior center, who scored just four total points in her previous two outings against Iowa and Minnesota, put on a show in the post, with a career-high 24 points and 11 rebounds. Nonetheless, she said the nature of the victory made the achievements feel bittersweet.

“We were disappointed,” Wolf said. “It really should have been a 15- or 20-point game at the end, and we let them back into it. That’s our mentality, controlling it from the tip to the end of the game.”

Outside of simmering stretches of the second and third quarters in which Wolf got basically whatever she wanted inside, the game came down to NU finding a way to compete with a proverbial hand tied behind its back. In some cases, like the second quarter, that meant McKeown benching Pulliam temporarily out of a timeout. The returns were immediate. NU reeled off a 9-0 run to take a lead it would not relinquish. Jordan Hamilton scored seven of those nine on three straight possessions. Purdue scored just eight points in the second quarter, and turned it over five times.

But after ‘Cats caught Pulliam’s illness for much of the fourth quarter, shooting just 2-for-16 and allowing the Boilermakers to make things very interesting at Welsh-Ryan Arena, their medication came from a familiar face. Two late lay-ups, one from Wolf and one from a visibly relieved Pulliam, helped give NU the breathing room it needed to put the game away.

A road showdown with fellow Big Ten leader (and likely fellow Top 25 team) Indiana looms on Thursday. “Mr. Sunshine” is confident that his temporarily diminished guard will rise to the challenge.

“Pulliam missed some shots that she hasn’t missed since third grade, but I don’t worry about her,” McKeown said. “She’s got amnesia. She’ll be right back at it Thursday.”