Win Shares are one of the best methods to determine the overall talent of a player or team in the WNBA. In general, win shares explain the total number of wins a player is worth to a team. Makes sense, right?

Usually, the totality of a team’s win shares lines up closely with its total number of wins at the end of the season. For example, last season Aces players tallied 19.7 win shares as the team racked up a 21-13 record. So while it is not a perfect statistic, it is the best way to gauge the expected value of each player and the expected talent of each team.

So how does this help us understand the upcoming season?

There’s no other way to put it: this was the wildest offseason in WNBA history. Some of the league’s biggest names, like Mystics forward Elena Delle Donne and Aces center Liz Cambage, have chosen to forgo their season’s because of the pandemic.

Other top-tier talents, such as the Storm’s Breanna Stewart or the Mercury’s Diana Taurasi return to the hardwood after injury-riddled 2019 campaigns. Or take teams like the Liberty and Dream, who have overhauled almost their entire rosters.

But there is no need to worry. Using data from last year and updated rosters, I was able to put together a pre-season win-loss projection for every team.

First, though, let’s take a look at…

At the top two spots, you’ll find the WNBA champion Washington Mystics who were led by Delle Donne and the runner-up Connecticut Sun who were led by Jonquel Jones. Sorry if you’re just getting caught up on the league, though, because both players are sitting out this season.

Toward the middle of the pack, teams like the Lynx, Storm, and Mercury took steps back from the 2018 season without their leading women on the roster. This year the Storm and Mercury return their top talents, while the Lynx can expect growth from last year’s Rookie of the Year Napheesa Collier.

At the bottom of the barrel, we find the Wings and Dream. These teams made major changes in the offseason, picking high in a stacked draft class and landing on some nice veteran pieces for the 2020 season. The Liberty took a different route in free agency (not using it), but I’m sure a team made up of 7 rookies will turn out just fine. 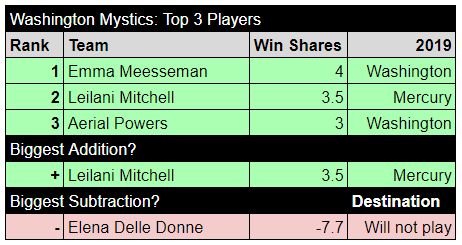 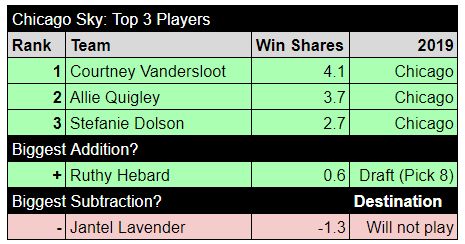 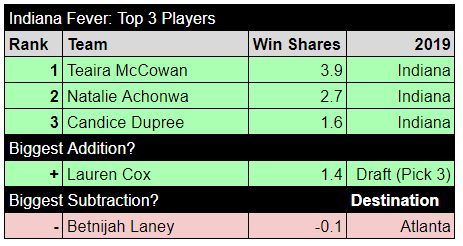 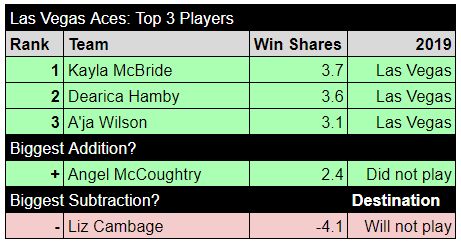 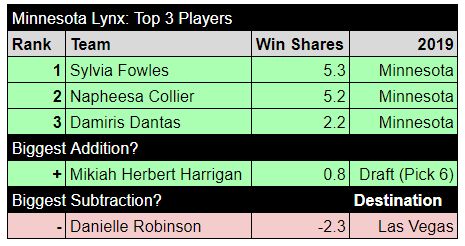 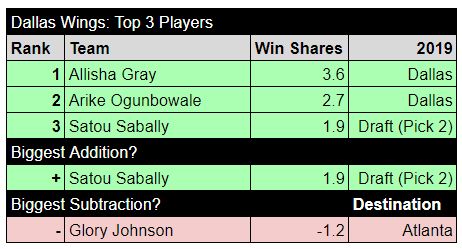 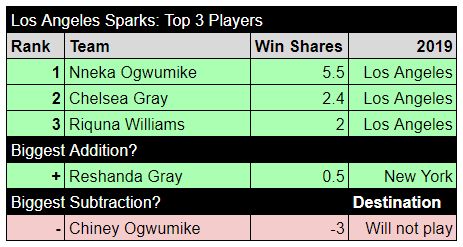 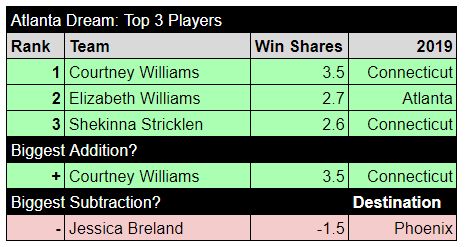 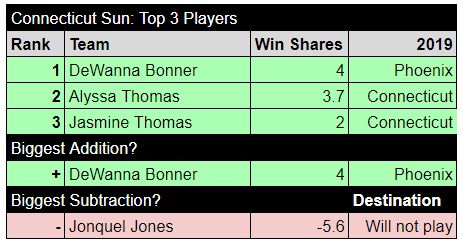 To complete the win-loss projections, I found the sum of win shares on each new roster and multiplied this total by .647 to adjust for the shortened season. As for rookies, I took the data from my previous piece to find the expected value of each player. For example, in a full 34-game campaign, one would project Sabrina Ionescu to add 3.3 wins to the Liberty roster. In the shortened season, however, the Liberty would only gain about 2.1 wins from its top rookie.

What this tells us about the upcoming season

There is a lot we can learn from this Win Share-based projections. The first thing it does is confirm what we all know about Seattle: in terms of talent, it is miles above the rest of the league. It’s almost embarrassing how much they stand out. That’s what happens when you get Breanna Stewart and Sue Bird back, I guess.

The gap between the WNBA’s middle and bottom-tiers Is nearly indistinguishable.

Right below the Storm, you’ll find the WNBA’s bloated middle class. On the bright side, it doesn’t seem like any team will suck this season, as the expected difference between third place and the basement is a mere 4 wins compared to last year’s gap of 13 victories. Even when you adjust the win shares to a 34 game season, this year’s gap of 7.6 win shares pales in comparison to the 13.9 win-share-gap from last season.

Unpredictability in the middle.

With this much parity, in a 22-game season nevertheless, the slightest roster weaknesses will be magnified. Every injury is a crushing blow, especially with shortened rosters. Even a 3-game hot streak could bring a team over the top. A player who is slow to come back from an injury could sink their squad’s playoff chances. The regular season has never meant as much as it will this season.

This could spell doom for teams that are less prepared. Take the Fever, who arrived in the bubble after every other team, and didn’t have the same practice time leading up to the season. A slow start coupled with even 2-3 extra losses could be the difference between a top 4-seed and a bottom-4 finish.

The shortened season could also benefit the league’s older vets who had the opportunity to practice while in quarantine. That isn’t to say the younger players are out of luck, though, as fresh limbs can go a long way if any veterans pick up rust.

While she is expected to miss the season, no final decision has been made by Elena Delle Donne’s camp. If we’re being real, the Mystics may be the only team (save the Mercury) that have a legitimate chance at upsetting the Storm. Regardless of her decision, the defending champs will be underdogs. But with Delle Donne, at least they’d have a dog in the fight.

If you think you know who this year’s MVP will be, you’re probably wrong. Individual awards will be more unpredictable than ever before, and a string of 5-6 spectacular performances could easily launch an MVP candidacy. With a handful of the league’s brightest stars sitting out this season, there’s a long list of players who could blossom into MVP-contenders.

Who may these fresh faces be? Well, the Mystics’ Emma Messemen, Aces’ A’ja Wilson, and Lynx’s Collier will likely become the primary option for their respective teams this season and have already-impressive resumes to build off of. Stewie will be the front-runner to bring home her second MVP trophy, but it won’t be a cakewalk this year. Nothing will be.

Issues with the projections.

Of course, we will see big drop-offs for last year’s top teams: the Mystics, Sun, Sparks, and Aces all got at least 5 (adjusted) wins worse, talent-wise.

My biggest gripe with the projections? I don’t see Los Angeles or Connecticut getting this much worse. I would bet on Candace Parker to have a bounce-back season for the Sparks, and with Dewanna Bonner and Alyssa Thomas the Sun should be just fine.

Win shares are not a perfect stat, but the perfect stat doesn’t exist. This is the best method we currently have to understand the season ahead. Let’s get pumped for WNBA basketball.