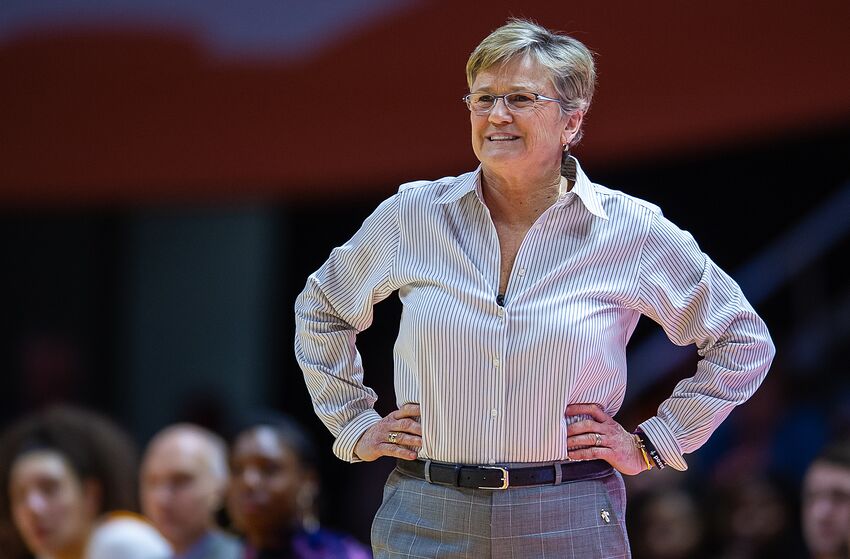 By the numbers: Big Ten’s performance through week six by Nicholas Niendorf
Streaking Duquesne, Hyduke excels and more around Atlantic 10 by Natalie Heavren

As basketball analyst LaChina Robinson and former Tennessee head coach Holly Warlick took the stage for their conversation at Monday’s BreakThrough Digital Leadership Summit for Women in Sports, Robinson joked to Warlick, “I’m just surprised that, after 38 years, I don’t see any orange at all in this outfit!”

“We’ve got ‘em right here,” Warlick replied, gesturing to a bouquet of orange flowers positioned on a table between their seats.

That exchange set the tone for a conversation that was at times nostalgic, funny, and serious. Warlick reflected on her 38 years of playing and coaching at Tennessee, recalling how she came to the school on a track scholarship and then walked on to the basketball team. “It gets in your blood,” Warlick said of being a Lady Vol. A few years after graduating, when legendary Tennessee head coach Pat Summitt asked her to return to Knoxville as an assistant coach, Warlick said, “I can be there in 16 hours!”

The most impactful things Warlick learned as Summitt’s assistant applied far beyond basketball. “Don’t be afraid to do the little things” was one. Respect was another: “You’re going to meet the same people on the way up as you do on the way down. So you treat people with a tremendous amount of respect,” Warlick explained. “And probably the best thing that Pat taught me was to listen.” To make that point, Warlick told a story about how Summitt reacted when, with seconds to go in an SEC championship game and Tennessee needing to break the opponent’s press, a graduate assistant said she had a play in mind. “Sit down and draw it,” Summitt said. The assistant did, and Tennessee got a layup off of it and won.

Since Warlick was fired as the team’s head coach in March, she has been content to move at a less hectic pace. Warlick quipped, “My dogs actually know who I am! And so I’m good right now. I’ve enjoyed it.” She plans to do some commentating, though she did not offer any details, and she recently ran a marathon. “It was my first and my last,” she said with a laugh.

However, Warlick hopes that Tennessee will not be her last head coaching stop. She told Robinson, “I want to get back into coaching if it’s right.” She listed several things about the profession that she misses, including practice, game preparation, and even recruiting. “I never thought I would say this. This is crazy!” Warlick exclaimed. “I miss the recruiting side of it—not the grind, but I miss seeing coaches out on the road, which I love. You can bounce stuff off of [them]. I formed a lot of friendships with parents, going into their homes and speaking about our program and talking about their daughter … [I] miss the interaction with the recruits and their families.”

“Something in my heart just jumped when I thought about you ever coaching again and not wearing [orange],” Robinson said. “I don’t know what that’s going to be like, but I’m excited for it.”

In her time away from coaching, Warlick has identified several lessons that she would take to a future job. “You can point the fingers, but you’re ultimately in charge, and I can now reflect to see what I could be [doing differently],” she explained. “… One is, take time to choose your staff. You gotta have that loyalty, and you’ve got to be on the same page.” Second, she said, “We were always caught up in, ‘We’ve got to sign five-star kids.’ One year we were number one in the country [in] recruiting, [the] next year we were number three, and I look back and I go, ‘Y’all, we were, we’re almost too good at recruiting.’ If I had to do it again, I would say, ‘Let’s sign a couple of five-star kids, maybe two, and … [then some] three-star kids, those kids that … [would] run through a wall. Those kids are hard to find now. I would really focus on those type of kids and don’t get caught up in, ‘We got to be on the top of everything.’” Third and “probably most important,” Warlick said, “would be a better communication with the parents.” Growing up, Warlick would have been embarrassed if her parents talked to her coaches on her behalf. But today, she said, it’s much more common for parents to communicate with coaches, and she could have adjusted to that better.

The BreakThrough Summit was billed as an event to “develop and celebrate women in sports,” so it was hardly surprising that Robinson also asked Warlick about growing the number of female coaches. Warlick credited the people who hired her and other female coaches and urged more people to follow their lead. “We gotta trust women,” she said. “I mean, we have this fear of, if we hire this woman, all she wants is my job. No! … We’ve got to understand that there’s a lot of women that are not coaching that are really, really good. And you gotta put aside, I don’t know if it’s pride, but give that person the opportunity. We gotta take care of each other … A lot of young kids coming out right now, I think, will make great coaches. But it’s hard to get in … we gotta give them that opportunity.”

Robinson ended the conversation with a series of rapid-fire questions. One word Warlick would use to describe herself? “Passionate.” One word to describe the UConn-Tennessee rivalry? “Intense.” And Warlick’s favorite quote or mantra? “Make a difference in somebody’s life.”

For many generations of Lady Vols, Warlick did just that. Soon, likely in a different color of the rainbow, Warlick hopes to continue that work.